The Main Stages of Work

The Department of Internal Medicine № 2

The department was founded in August, 1936. The first lecturers were Professor Fishenzon, Professor Geft, junior members of teaching Shinkaryova, Zaslavska. Before the Great World War the department staff worked at the problem of cardio-vascular system and gastrointestinal tract diagnostics and treatment.

In post-war years the department was headed by Professor Britvan, then by Professor Davidov and by senior lecturer Lidskyy. At that time the scientific themes were connected with the study of cardiovascular system pathology and blood system diseases ( junior members of teaching Rybachuk, Pilat and others).

From 1952 to 1956 the head of the department was Professor Piayd. He guided the study of oncology tasks.

In 1956 Professor Kolotova headed the staff of the department. At that time the scientific interest was connected with the study of blood system diseases.

In 1992 the department  was headed by Professor Malenkyy.

The members of the department wrote their research works, which became interesting for international association.

In 2008 the department was headed by Doctor of Medical Sciences, Professor Kolisnyk. He guided research of the department, which is called “ The peculiarities

of medical rehabilitation measures in case of internal organs and systems diseases of patients with vertebral pathology”.

In 2013 the department was headed by Doctor of Medical Sciences, Professor Shevchuk Sergey Viktorovich. At present time the department is working at the research project: "To examine the role of clinical, molecular genetic, metabolic, inflammatory and gemokoagulyatsii factors in the formation of cardiovascular lesions in rheumatoid arthritis and to develop recommendations for their prevention and treatment."

In 2003 Serhiy Victorovich defended his Ph.D. thesis on the subject: "Justification and selection of baseline therapy of rheumatoid arthritis based on methotrexate and leflunomide". From 2005 to 2008 he studied at the doctoral program at the NSC "Institute of Cardiology named after Academician M.D. Strazhesko" of the Academy of Medical Sciences of Ukraine. In 2008 Serhiy Victorovich defended his doctoral dissertation on the topic of "Defeat of vessels in patients with systemic lupus erythematosus." The author of 96 printed works, 146 patents for inventions, 5 methodical recommendations, 8 informational letters, co-author of 2 monographs.

In 1999 Elena Yuryevna graduated from the Vinnitsa Pirogov State Medical University. In 2008 she graduated from the postgraduate study program. In 2008 she defended his thesis on "Metabolic risk factors in patients with rheumatoid arthritis: the relation with the course of the disease and the nature of pharmacotherapy." From 2016 Elena Yuryevna works as an assistant of the Department of Internal Medicine № 2, from 2017 - Associate Professor of the Department of Internal Medicine № 2.
She is a co-author of 42 scientific papers, including 2 methodical recommendations and 1 manual.

In 2006 Julia Sergeevna graduated from the National Pirogov Memorial Medical University, Vinnytsya. Since 2010, she has been a researcher at the Scientific Research for Rehabilitation of Disabled People Institute, a physician-rheumatologist of the I category. In 2014 she defended dissertation on the topic "Risk factors of atherosclerotic vascular disorders in patients with antiphospholipid syndrome" in specialty 14.01.12 - Rheumatology at the Specialized Academic Council D 26.616.01 National Research Center "Institute of Cardiology. acad. M.D.Strazhesko» AMS of Ukraine. From 2014 she works as an assistant of the department of internal medicine № 2 in a part-time.

A student who plans to take part in the retake of the exam must inform his / her teacher by September 18, 2020.

The retake of the exam in internal medicine for 4th and 5th year students will take place on June 24, 2020 at 9.00 on the Microsoft Teams platform with the results recorded.

The exam is held with a passport and a student card.

Assessment of the exam remote form

Assessment of the exam remote form

The exam will be conducted on the Microsoft Teams platform with the results recorded.

Registration on the platform with the obligatory use of video recording and a microphone takes place at 8.30.

The exam consists of test tasks and situational tasks from the modules "Cardiology", "Rheumatology", "Hematology".

The answers to the questions of situational tasks should be complete (diagnoses should be formulated according to modern classifications, prescribed treatment in the form of prescriptions, etc.).

After registration on the platform, the student provides a written response within 1 (one) hour.

IMPORTANT: after one hour from the beginning of the student's written work, answers will not be accepted, the platform will be closed by the examiner.

After receiving written answers and checking them, the results of the exam are announced and commented in the form of a discussion by the examiner.

The component of the assessment of the exam in the discipline "Internal Medicine" in points is as follows:

Questions for the exam, methodical materials are displayed on the website of the department.

Head of the department

Completion of missed classes during quarantine

For the period of quarantine at the Department of Internal Medicine № 2 according to the Order № 4 from 03/31/2020, working out of absences of practical classes will be carried out as follows:

1. On Monday, a student submits a written application for the topic of practical training (no more than 3) to his teacher.

2. On Wednesday, a student receives a specific assignment on a missed topic.

3. By Friday, the student will provide a written answer to each topic.

4. On Saturday, the teacher informs the student of the grade. If the student does not arrange the assessment, it is possible to practice online.

Under the guidance of Doctor of Medical Sciences P.F. Kolisnyk the department research work “The peculiarities of medical rehabilitation measures in case of internal organs and systems diseases of patients  with vertebral pathology” was performed.

”The working out of programmes of multilevel medical rehabilitation in case of internal organs and systems diseases. 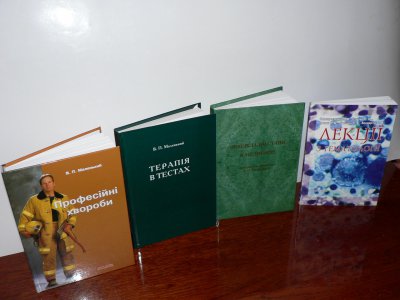